Miriam Sullivan was a schoolteacher and a regular at the Double R Diner.

Miriam spoke to Heidi and Shelly at the diner after eating one day. When she finished, she bought two cups of coffee to go, and left behind a generous tip.

Later, when walking outside, Miriam witnessed a young boy get hit by a truck, which she came to see was driven by Richard. Miriam looked at the truck in horror as it sped off.[1]

Miriam sent an incriminating letter about Richard to the Sheriff's Department before he showed up at her trailer. She warned him about the letter and he broke in, savagely beating her.[2]

Despite bleeding heavily, Miriam managed to crawl from the scene until reaching a group of young boys, who called their mother for help.[3] She was soon taken to Calhoun Memorial Hospital, where she was kept in the intensive care unit, in need of an operation.[4] 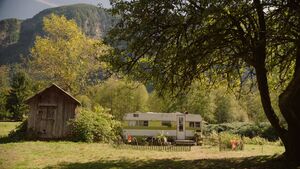