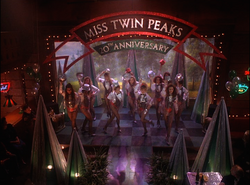 The Miss Twin Peaks Contest was a beauty pageant held annually in Twin Peaks since 1969. The prizes for the winner were a cash prize, a dozen roses, and a scholarship to the college of her choice.

Norma Jennings was crowned Miss Twin Peaks in the first-annual pageant and returned as a judge in 1989, with her sister, Annie Blackburn winning the title.[1]

Miss Twin Peaks 1973 was electrocuted during the ceremony. A moment of silence is held for her at the annual Candlelighting and Christmas Tree Ceremony.[2]

Talents displayed at the pageant included Lucy Moran's dancing and a dance by Lana Milford described as "contortionistic jazz exotica."

The theme of the speeches given by the contestants was conservation of the forests, suggested by Benjamin Horne of the Stop Ghostwood campaign.

Following Annie Blackburn's win, the lights were shut off and smoke bombs began to go off, then Blackburn was taken from the stage by insane former FBI Agent Windom Earle, disguised as Margaret Lanterman.