On March 10, 1974, Dale Cooper visited the city to test his hypothesis that the breakdown of society was rooted in the advent of skyscrapers. However, Cooper was attacked and robbed during the night and sought refuge with an artist until her lover arrived. He then wandered into a protest and approached a policeman, but was arrested along with several protesters. The next day, he resolved to take the judge's advice and "stay the hell out of New York."[1]

After turning eighteen, Donna Hayward moved to New York, where she studied at Hunter College until dropping out after signing on with the Ford Modeling Agency.[2]

Sometime prior to September 2016, an anonymous billionaire purchased a skyscraper which contained a glass box within its penthouse. Sam Colby – who had been hired to watch the box – and Tracey Barberato were killed by a figure that appeared within the box.[3] 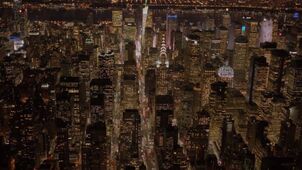 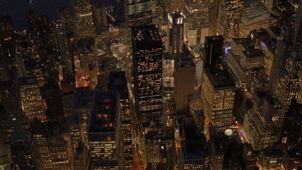 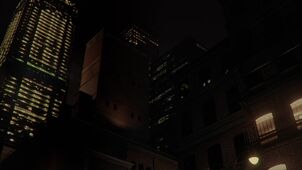 The establishing shot of New York City is a stock footage. [4]