The purple sea was a great, mauve-tinted body of water, home to several different supernatural beings.

The sea was black and calm with a sky like a purple bubble. It's extent and nature was unclear. Dale Cooper, after spending twenty-five years trapped in the "waiting room" area of the Black Lodge, found himself there after falling through the floor of the waiting room, and then being flushed out of a glass box experiment in New York City.[1] 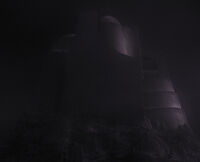 An enormous, monochromatic fortress sat on a rocky atoll. This was the residence of Senorita Dido and the Fireman.[2]

Possibly located in the fortress, a mansion room overlooking the purple sea contained a wall socket that allowed one to travel through electricity to various points on Earth. From above, the room simultaneously seemed to be a tiny spaceship floating in an infinite void.[3]

Behind the scenes[edit | edit source]

The projection room was shot in the Tower Theatre in Los Angeles also famous for being the set of the Club Silencio in Mulholland Drive.

Lynch came up with the idea of a space ship on top of a glass box.[4]

This place might be inspired by the "Mauve Zone" from the writings of Kenneth Grant (the first person to associate Western Occultism/Magick with the alien abduction phenomena and to emphasize the role of Jack Parsons in the history of occultism, concepts that were reused by Mark Frost in The Secret History of Twin Peaks and Frost being a noted Theosophy amateur):

Grant described the Mauve Zone (like the Tree of Life's Daath), as a self-contained world at the very edge of reality between what human beings can experience and "non-existence". Magical manipulations of human reality could be done there by alien beings that could be considered as monsters, it could be visited in a particular kind of sleep, it sent messages to human reality via phenomenon like UFOs and one of the main entities associated with it is called "the daughter."

Grant also emphasised on the role of the nuclear bomb in an "occult revival" or increase of magical phenomena after World War II.

Retrieved from "https://twinpeaks.fandom.com/wiki/Purple_sea?oldid=41017"
Community content is available under CC-BY-SA unless otherwise noted.