The Search for the Zone

The Search for the Zone, located at thesearchforthezone.com, was an Internet blog maintained by Buckhorn high school principal William Hastings, dedicated to the topic of parallel universes and alternate dimensions. Hastings ran the site with town librarian Ruth Davenport. Heinrich Viegel was an occasional contributor.[1]

The blog was started on June 1, 1997. As early as 2010, visitors could leave comments in a guestbook, to which Hastings would occasionally respond. The last site update took place in November 2015.[1]

The week before Ruth Davenport was found dead, Hastings left a post stating that the two of them had managed for the first time to enter "the zone," where they made contact with "the Major." Buckhorn police detective Dave Macklay provided a copy of the post to FBI investigator Albert Rosenfield.[2]

Welcome to The Search for the Zone. Here you will find writings, links, and other bits and pieces as we find the time and inclination to post them up. This site is a journal of my (and my partner’s) fascination with multidimensional/time travel, dark matter, the afterlife, etc. We are interested in a lot of things, but these are the main topics of discussion... 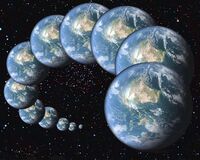 We will have to reconcile with the question that if someone from outside our familiar world gains access to our plane of existence, what ramifications will that entail? There might be forces at work from deep dimensional space, or from the future…or are these one in the same? Think of the events that could have splintered time? The things that could have laid the seed for a starting point for this development? Perhaps technological innovations or the assassination of President Kennedy?

A link below led to Hastings' older journal entries.[1]

Parallel Universes and Density Shifting
http://www.grantchronicles.com/astro15.htm
The Science of Parallel Universes
http://phys.org/news/2015-09-theory-parallel-universes-maths-science.html
On Electricity by Nikola Tesla
http://www.tfcbooks.com/tesla/1897-01-27.htm
The Horizon Project
http://www.thehorizonproject.com/
Why Frequencies are the Key to Understanding Parallel Universes and Time Travel (link takes you to another site)
Fred’s Blog
http://mishscifimusings.wordpress.com/
Epoch Times article on Parallel Universes
http://web.archive.org/web/20130906031010/http://www.theepochtimes.com:80/n2/science/is-deja-vu-caused-by-parallel-universes-video-229364.html
Great article on Hugh Everett III
https://www.scientificamerican.com/article/hugh-everett-biography/
This is a little goofy, but always nice to see some local Buckhorn/Rapid City area lore…after all this is the sacred lands of the Lakota
http://rapidcityjournal.com/now/today/rcj/black-hills-ghost-stories/collection_9a079eda-799d-11e5-b74c-9b73ebaf901e.html#1[1]

Science Fiction has been a source of enjoyment for me since I was ten years old, when I read Orphans of The Sky.

Three WAV audio files were linked in this section:

At the bottom of the home page were banner links to subscribe to the site's newsletter or donate, and several awards, including the Yahoo! Pick of the Week and the WebTrips Rockin' Site of the Week.[1]

As of 2016, the site guestbook contained the following posts:

TheSearchfortheZone.com was a real website owned by Rhino, intended to promote the release of the Twin Peaks (Music From The Limited Event Series) soundtrack. Mark Frost suggested the concept but was not involved in writing the site itself.