"From the Pearl Lakes to Snake River...
From Seattle to distant Rome...
We must always love and cherish...
Our High School and our Home."

Twin Peaks High School was the high school in Twin Peaks. Laura Palmer was a student at the time of her murder and classes were ended early the next day after a moment of silence.

As of 1989, the school mascot was a Steeplejack, which replaced the Lumberjack as early as 1969.

People affiliated with the school[]

The page has some incoherencies in its annotations: there are a few different names for the same pictured person. This is indicated here with the slash symbol "/".[2] 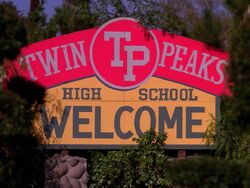