Waldo was a myna bird belonging to Jacques Renault. It was present at the murder of Laura Palmer, having attacked her during her final moments. It was a key witness to the investigation, having remembered the phrase, "Leo, no!"

Andy finds a file for Waldo, a myna bird owned by Jacques Renault in Lydecker's files.[1] After finding the picture of Jacques's cabin Cooper says to pack up to find it. The officers go farther through the woods and find the cabin from the picture, where they find Waldo in a bird cage.[2]

The only photograph obtained by development of the film from Jacques' cabin is a picture of Waldo on Laura's shoulder. Doctor Hayward and Harry study Waldo the bird and Hayward says it will start talking once it is healthy. Cooper, just in case, leaves the dictaphone turned on.[3]

Leo listens to a police broadcast of Lucy talking about Waldo and drives away to kill Waldo. Alone in the conference room, Waldo says "Laura?" and a gun fires and breaks a picture. After that the officers listens to dictaphone recording of Waldo's voice.[3] 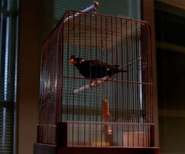 Waldo at the Sheriff's station
Add a photo to this gallery

Retrieved from "https://twinpeaks.fandom.com/wiki/Waldo?oldid=44074"
Community content is available under CC-BY-SA unless otherwise noted.